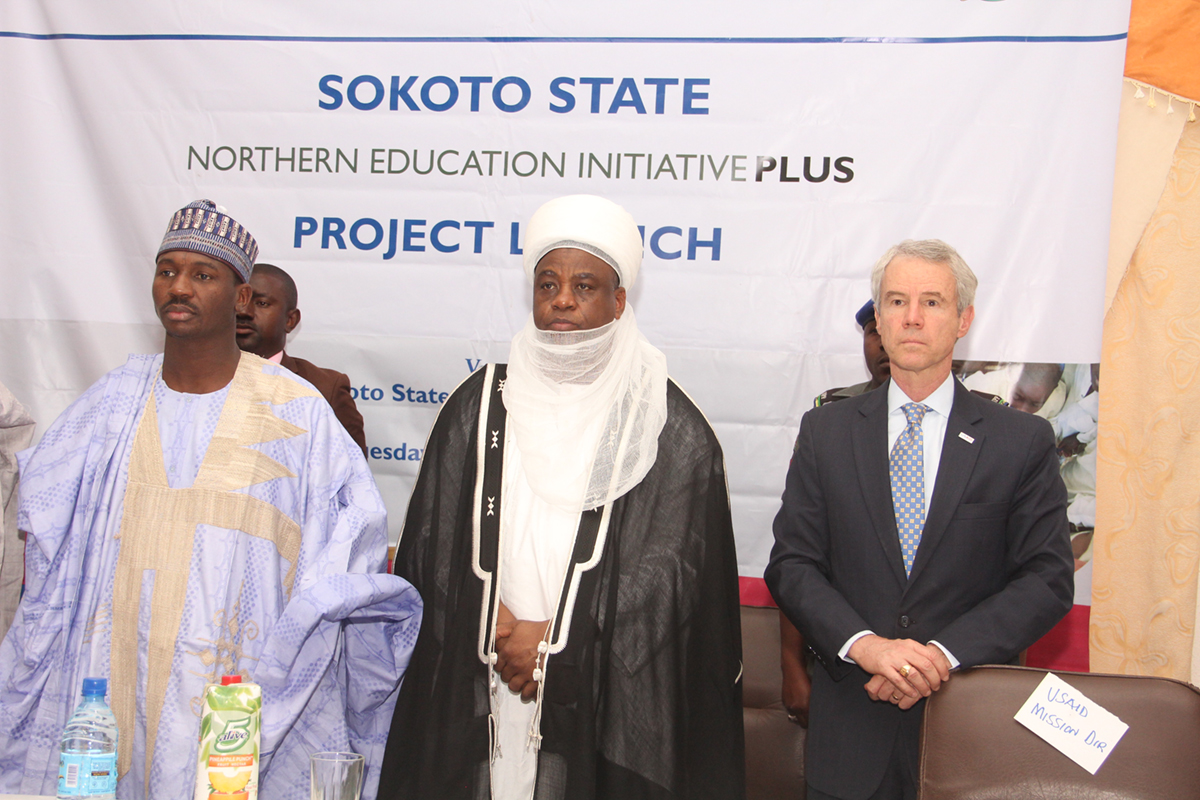 February 24, 2016 By Creative_ADMIN Comments are Off

More than 100 elected officials and community leaders kicked off the Northern Education Initiative Plus project in the state of Sokoto.

“The responsibility of ensuring that every child accesses education lies on everyone and not just government alone,” said Nigeria’s foremost religious leader, His Eminence the Sultan of Sokoto Alhaji Muhammad Sa’ad Abubakar III, who was at the Feb. 16 launch of the project. “As traditional leaders, we will support to enforce punitive laws against parents who refuse to send their children to school.”

Funded by the United States Agency for International Development (USAID), the Northern Education Initiative Plus is a five-year, Nigerian government-led project designed to reach nearly 1.6 million children in first to third grades. It also targets more than 500,000 out-of-school children and youth attending some 11,000 Non-formal Learning Centers in three states—including Sokoto. It is implemented by Creative Associates International, three other global organizations and four Nigerian NGOs.

Sokoto state has recently repositioned its education sector for advancement. A state of emergency was declared on the sector backed by 27 percent of its budgetary allocation for 2016.

Education investment in Sokoto state will revolve around two priorities—access and quality. The state government has proposed in its budget to expand school facilities, train teachers and adopt a school feeding program all geared towards making education accessible especially to vulnerable groups.

The focus of the Northern Education Initiative Plus “strengthens the state government’s plans and strategies for the advancement of education in the state,” said Sokoto Governor Aminu Tambuwal. “It rhymes perfectly with our declaration for the state of emergency on education.”

[perfectpullquote align=”right” cite=”Aminu Tambuwal, Governor of Sokoto state  ” link=”” color=”” class=”” size=””]”The focus of the Northern Education Initiative Plus strengthens the state government’s plans and strategies for the advancement of education in the state. It rhymes perfectly with our declaration for the state of emergency on education.”[/perfectpullquote]

Before this initiative, Sokoto has benefitted from a number of earlier interventions funded by USAID, including the Northern Education Initiative.

The U.S. government’s sustained investment in the state is driven by the desire to “meet the yearnings of parents for quality early grade reading instruction for their children especially girls,” said USAID Nigeria Mission Director Michael T. Harvey.

The five-year Northern Education Initiative Plus project implemented by Creative Associates International will strengthen the states’ ability to provide quality education—especially for girls, orphans and children enrolled in nontraditional schools—and improve children’s reading skills. In addition to Sokoto, the project includes the state of Bauchi. A third state will be announced.

The project will focus on building programmatic ownership among federal, state and Local Government Education Authorities, as well as increase their commitment to quality early grade reading instruction and increased access.

It also seeks to strengthen Local Government Education Authorities’ ability to better train and manage teachers, along with improving their capability to plan, budget and deliver on professional development, ensure school governance, mobilize community support for learning and the timely distribution of materials.